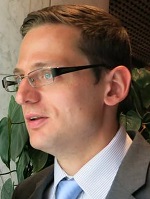 For many, the idea of quantum computers—which have the potential to be 100 million times or more faster than today’s personal computers—seems like little more than science fiction. While we’re likely several years away from seeing the first fully functional quantum computers on the market, Professor Robert Young is working hard to bring some of the first practical applications of the nascent world of quantum information science, on which quantum computing is based, to your doorstep.

Dr. Young holds a Chair in Quantum Information at Lancaster University in the United Kingdom and leads the Young-Quantum group, an experimental physics group focused on “developing practical quantum devices for applications in information and communication technologies.” One of his latest projects could help to drastically improve the ability of consumers and companies to detect counterfeit products—and quantum physics is what makes it all possible.

Through his spin-out company, Quantum Base, Dr. Young is working to commercialize a technology that capitalizes on the random nature of quantum materials to make it virtually impossible to copy security devices. The invention is called Q-ID and it could be on the market by mid-2018. Dr. Young spoke with Innovator Insights about his research and what the future might hold for this field, which—like the science on which it is based—promises seemingly infinite possibilities.

You wear a number of hats—what is your chief area of focus as a researcher and inventor?

My main focus is on looking at security applications of quantum physics, or quantum information processing. Outside of that, I do research in fields as diverse as random numbers and biology. I have a research fellowship from the Royal Society, which is the world’s oldest independent scientific academy and really supports the idea that people should be allowed to wander academically, find something of interest, and pursue that.

What is quantum information processing?

In the classical computer world, we’re used to this idea of binary logic based on a system of ones and zeroes [binary code]. Quantum information processing is analogous to that, except that we’re using a new basic element, quantum bits [Qubits], as our base. These Qubits exist in some mixture or undecided state between ones and zeroes. This means we can process information in a very different way and much faster than with binary logic. We can very efficiently solve some complex problems. It’s going to affect many other fields as well, in the same way that the digital revolution did.

How does this translate to the real world?

Right now, we’re looking to apply these concepts by using them to improve security; we can make devices that are “unhackable” and we can provide really robust identities to stop people from counterfeiting things. We’re just on the tip of the iceberg here. In the same way that 50 or 60 years ago we didn’t know where the digital revolution was going to go, we don’t know where the quantum revolution is going to go now—but we know it’s very exciting.

How did you come to apply these concepts to the problem of counterfeiting?

One of the biggest issues we have with the quantum world is we need to make very small devices, and because of the nature of the devices we’re working with, it’s very difficult to make them all the same. If they’re even slightly different, they perform in a very different way. With my background in computer science, as well as physics, I turned this problem on its head. I thought, “Well this is actually advantageous to anticounterfeiting, where you want a system that’s incredibly sensitive to imperfections and that’s easy to measure and very difficult to produce two of the same item.” We took that train of thought and developed a system where we can actually read the natural imperfections that exist in a quantum system using a mobile smartphone app. We’re using defects that are already naturally there, so there’s no engineering, and then we can read them using a standard device that’s in everyone’s pockets already.

It’s essentially an ink for anything that’s currently inkjet printed; we’re just adding some of our materials, like graphene, for instance. Those materials float around in the ink that’s set on the surface. When you take a picture with your mobile phone, the flash from your phone excites them and they glow with specific colors. The color they emit depends on imperfections at the atomic scale and you can read that fingerprint optically. The clever bit is that it reads a second signature that verifies it’s actually a two-dimensional material—meaning it’s a single layer of atoms thick—that has emitted it. So you couldn’t just use an array of LEDs or any conventional material to copy the color—it’s incredibly difficult to produce a second device that has exactly the same signature.

Will it be marketed soon?

We’ve trademarked the product as Q-ID® . We’re working with a variety of different partners, including one called OpSec, which makes 10 billion holograms a year. For a first route to market we’re looking at placing our tag on these holograms, because they already go on so many different products. We can turn a hologram—which is conventionally seen as a security seal, but is actually very easy to counterfeit—into a real security device that can be uniquely tracked with a mobile phone. So any product that has a hologram on it could have our technology on it by the middle of next year. We’re contemplating using it on products as diverse as designer goods, concert tickets, and passports.

Could customs officials use this app?

Those kinds of niche applications are fine, and there’s a real benefit to customs officials using the app of course, but what’s really exciting to me is that it allows anybody buying a product to verify the thing they’ve actually bought. If you take pharmaceuticals, for instance, counterfeit medicines cost one million lives per year. One million people a year die buying medicines they think are genuine, but that don’t include the active ingredient, so they’re not being treated for the disease they have, which was completely treatable. Now, if that medical product is tagged with one of our Q-IDs, the consumer can verify that it’s genuine using their smartphone and take it back to the shop if it isn’t.

Counterfeit medicines cost one million lives per year. If that medical product is tagged with one of our Q-IDs, a consumer can verify that it’s genuine using their smartphone and take it back to the shop if it isn’t.

Have you patented the technology?

Quantum Base has somewhere between 10 and 20 patents in various stages of the patent system and four have been granted. The patents relating specifically to Q-ID are a few out of those patent filings.

What’s your view on the role of patents for researchers and inventors?

Personally, I’ve always thought the pursuit of science is almost meaningless if it doesn’t change the world in some way. If I do an experiment in a lab and it proves a theory, that’s one thing, but if I do an experiment which proves something that can improve the way a device works and can make people’s lives better in some way, that is infinitely more valuable to me. I’ve always recognized patents are important because they are a means to translate science commercially. In my academic work, I always have this question in my mind about whether something’s patentable.

Do you have any criticisms of the patent system?

It can be incredibly expensive. Even in a world where you’ve done everything correctly, if you run into any legal challenges, it’s normally the party with the largest wallet that wins that battle. That’s at least a perceived issue in the patent world for me. A huge amount of the spending by my company is on IP. When you get to the PCT [Patent Cooperation Treaty] national stages it really ramps up in cost. I think it’s a shame there isn’t some internationally recognized central system to cut out that cost.

I don’t always think it’s the best, but it has significant advantages. Having a strong patent portfolio is very important for a small company. It adds value and a real essence to the company. Patents are something physical to an extent—they’re provable, demonstrable, concrete ideas on a piece of paper, like a contract. We’ve seen in software, for instance, where it’s hard to get patents in many countries, that technology tends to be closed and there are so many problems. So it’s a tricky balance.

What advice do you have for the next generation of inventors based on the challenges you’ve faced?

Especially when a patent becomes incredibly expensive, you have to know when to keep investing in an idea and when to let it go. I tend to sit on the side of sharing as much as possible. It’s much better to let an idea go and let someone else run with it than it is to protect it and never do anything with it. At the same time, successful people are those who have grit, so you also have to persist with an idea until it’s successful. That’s a very difficult balance.

I think the most important advice is to do something you really enjoy and are passionate about. Make sure you don’t get to the point where you hate your inventions because you’re working so hard that you can no longer see the benefit. If you’re passionate and interested in what you’re working on, then you’re the luckiest person alive and you shouldn’t worry about anything else.