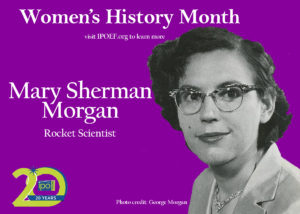 Mary Sherman Morgan, America’s first female rocket scientist, was raised on a farm in North Dakota. She didn’t start school until the age of eight after a sheriff and social worker forced her parents to send her. Mary’s love of chemistry began thanks to a fascination with the coal her family burned to keep them warm.

After graduating high school, she ran away to college but quickly dropped out after being recruited for a job as a chemist testing nitric acid for purity. When that job abruptly ended, Mary moved to California and began working at North American Aviation (NAA) calculating the performance of rocket fuel. Thanks to Mary and her development of a new rocket fuel, the United States was able to enter the space race and launch its first satellite, Explorer 1, in 1958.