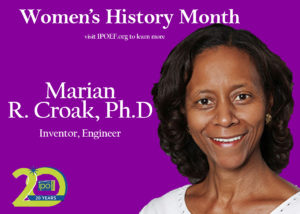 It now seems commonplace to communicate on the internet through audio and/or video. We can thank Marian Rogers Croak for this technology. Upon joining AT&T in 1982, Croak was a strong advocate for leaving wired phone technology in the past. Her tenacity led her to become the pioneer behind VoIP (Voice over Internet Protocol), which enabled secure and reliable voice communications over the internet.

After Hurricane Katrina, Croak invented technology that allowed people to securely donate to charity via text message. This technology was used when AT&T partnered with American Idol for its text voting system. Croak received a patent for text-based donations to charity in 2005. Now the Vice President of Engineering at Google, Croak holds more than 200 patents, half of which are related to VoIP technology.