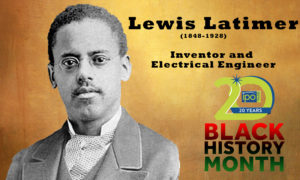 Lewis Latimer, the son of enslaved people who was born free in 1848, worked at a law firm in Massachusetts where he learned about patent drafting. Over time, Latimer became an exceptional inventor, even working alongside well-known inventors including Alexander Graham Bell and Thomas Edison and contributing to their patents on the light bulb and telephone. Latimer’s inventions include an improvement to railroad car bathrooms and an early air conditioning unit. Latimer patented the carbon filament for the incandescent lightbulb and is listed on seven U.S. patents.