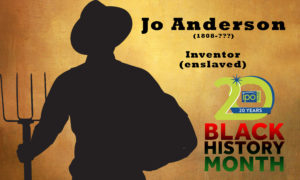 Jo Anderson was born an enslaved person in 1808. Historians now credit him as a major contributor to the design and creation of the reaper along with his owner Robert McCormick. A revolutionary invention in American agriculture, the mechanical reaper was used to gather and collect crops mechanically rather than by hand, which sped up the harvest. It is said that in its time, this invention was able to cut more wheat than a half-dozen farmhands. McCormick’s son Cyrus received a patent for the reaper in 1834 and went on to mass-produce it at International Harvester Co. in Chicago, IL.