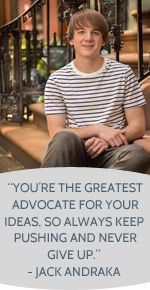 How One Inspired Teen is Determined to Improve Cancer Diagnostics

Jack Andraka became a national media sensation at the age of 15, when he presented his idea for a better way to detect pancreatic cancer in the early stages. The disease is infamous for its late-stage diagnosis—by the time most patients know they have it, it is usually too late to address it in any curative way. This is because the pancreas is housed deep inside the abdomen, so symptoms often don’t arise until the cancer has progressed to other organs; other early screening methods have proven largely ineffective. Mr. Andraka was only 13 when he unfortunately experienced this firsthand, after a close family friend died of the disease. But his approach to dealing with that grief was not quite typical of the average 13-year old.

While reading a scientific article on carbon nanotubes and studying antibodies during his eighth grade biology class one day, he “put two and two together” and came up with an idea for a test that would measure the level of mesothelin in a patient—a protein which some believe to be a cancer biomarker. Confident in his idea and armed with “youthful enthusiasm,” Mr. Andraka emailed 200 professors at Johns Hopkins University and the National Institutes of Health, and got 199 rejections. But one person—Professor Anirban Maitra of Johns Hopkins School of Medicine—was intrigued, and agreed to work with him. Using Mr. Maitra’s lab at Johns Hopkins, Mr. Andraka spent the next year working to perfect a prototype. He rushed to the lab each day after school to conduct his research. “Depending on what I was doing on that day, I might get out of the lab at 4:00pm or stay until 2:00am; my parents were definitely really lenient about it,” says Mr. Andraka. “It was a long and trying journey, but I eventually got there.”

And once he did, he created enough of a stir in the scientific community that he was awarded the Smithsonian American Ingenuity Youth Award in 2012, was chosen by Time Magazine as one of the 30 “world changers” under 30 in 2013, and has given a variety of talks, including in a number of TED forums.

Today, Mr. Andraka, a Maryland native who grew up between Baltimore and Annapolis, is still waiting for a patent on the test to be granted. In the meantime, the 19-year old is a freshman at Stanford University, where he is working on other potentially game-changing projects and—for the moment—majoring in engineering. Innovator Insights spoke more with Mr. Andraka to find out what he has learned about scientific research, patents, and inventing in the last four years, and what the future holds for this young inventor. 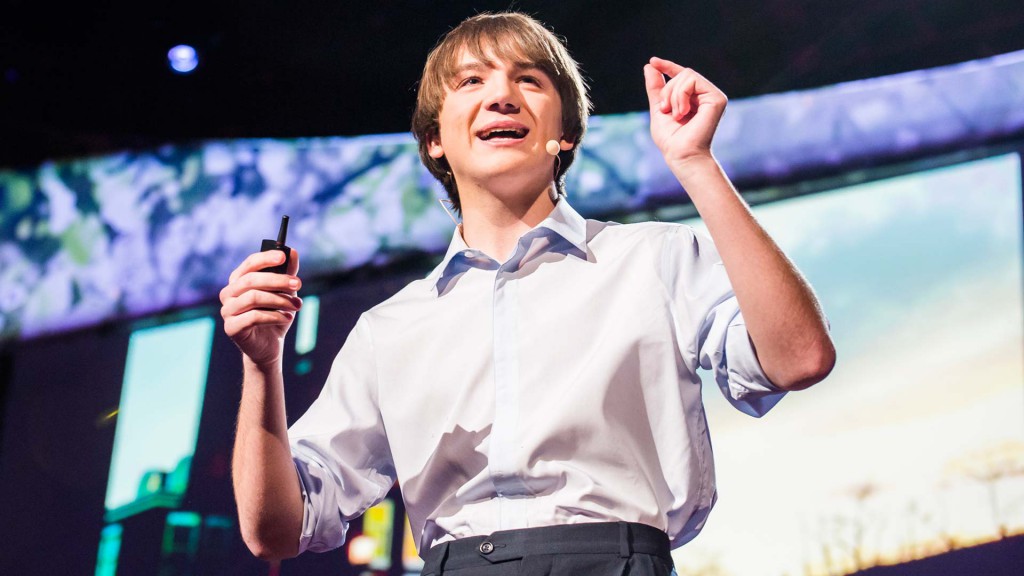 I guess I became hooked on science around the age of three when my parents would do basic backyard experiments with me. I got into scientific research in sixth grade because I was required to participate in the science fair and really fell in love with the process. I also come from a family of engineers; all of my aunts and uncles on my dad’s side are engineers or computer scientists, my dad’s a civil engineer, my mom’s a nurse anesthetist, and my brother’s an electrical engineer. So, it kind of runs in the family. But no one has really done research or inventing besides me.

Did you have other experiences with inventing before this test?

A lot of times the patent system is portrayed as this archaic system that really limits innovation and collaboration, but in my opinion it spurs innovation because it offers a financial incentive.

My sixth and seventh grade science fair projects were types of inventions. In sixth grade my project was based on low head dams, which are structures where the water flows over the top of the dam and forms these really dangerous hydraulic conditions that kill a lot of people every year. As a kayaker, I had a vested interest in this. I found different structures I could attach to the face of the dam and figured out which ones were the best at mediating the dangerous conditions. It was a pretty basic project. The next year I used bioluminescent bacteria to detect water contaminants. Both of those projects were super low-tech though. My ninth grade project on pancreatic cancer was really my first serious scientific research.

Is there a name for your test yet, or have you published a research paper?

I haven’t come up with a clever name for the test yet, and I haven’t published a paper; that’s primarily at the advice of my attorney, who has said not to until the patent is issued.

What did you learn from the process of researching and developing the prototype in the lab?

I’ve learned so much along the way—it was my first time in a serious scientific research lab, and I also learned all about patent law. Before this, I just thought you applied and got a patent two days later. But I learned that it’s a multi-year process. It shattered a bit of my youthful optimism, but it also opened my eyes to the real world of science, where you get patents and publish papers.

In terms of getting the patent, I definitely didn’t realize how absolutely crucial it is. I thought, “Oh, I came up with this prototype, now we can go to market,” and people around me said, “No, you have to get the patent, and then do negotiations, and then you get to clinical trials.” It’s this gigantic 5 to 10-year process, so it’s definitely been frustrating in that sense. But the hoops that are in place are there for a reason.

Some people think those hoops hinder innovation, and you’ve received criticism for pursuing a patent yourself—what are your thoughts after having gone through the process?

Getting a patent doesn’t really conflict with the [open access] beliefs I have, because people were able to see my research.

I am a giant advocate of open access. I believe that everyone should have access to knowledge and be able to look at other people’s work. At the same time, I believe that an individual’s efforts and time should be rewarded. Getting a patent doesn’t really conflict with the beliefs I have because people were able to see my research, and I also made sure that my patent was narrow enough. For example, I only patented this method for the detection of mesothelin. That makes it very flexible so that other people can go out there and develop the test for other allocations. Other groups could develop a test for other kinds of cancer or HIV/AIDS or heart disease. I think that limiting the scope of the patent was a really good thing in the long run.

A lot of times the patent system is portrayed as this archaic system that really limits innovation and collaboration, but in my opinion it spurs innovation because it offers a financial incentive. Why would companies or private entities go out there and develop these technologies if they’re just going to then be used by everyone? I do think the power given by some patents is a bit overreaching at times, but in the long run there’s a net gain because it spurs all of this innovation and protects and awards an individual’s efforts.

What’s the status of your patent and the test now?

We have filed an international Patent Cooperation Treaty application and a provisional U.S. patent application. We’re still waiting on the U.S. utility patent to be granted, and we’ve been in talks with different biotech companies about licensing the technology once it is.

What other projects are you working on, and what are your plans for the future?

I’m currently working on two different really cool projects at Stanford. The first is these inkjet-printed biosensors, using just a normal inkjet printer that you have in your home. These biosensors will change colors in five minutes, cost less than one penny, and they detect things like environmental contaminants and communicable diseases, such as malaria and cancers. You can image the color change with your phone and upload it to an app and it will read the results. For example, if it detects environmental contaminants, you can crowdsource environmental monitoring. It allows you to create a map of the pollution in your area so you can see exactly where the contaminants are coming from and how they impact your environment.

My second project is on nanorobots. These are super small robots programmed using DNA that actually learn how to treat your cancer—they will go into your bloodstream and really personalize your therapy. They can also actually tinker with the genes of cancer cells and knock down resistance to certain chemotherapy agents, or they can make your cells glow for diagnostic purposes.

My hope is to become an M.D./Ph.D in the future. Currently, my degree path is electrical engineering, but my possible degree has changed so many times in the last three months that my parents probably have whiplash. I really want to go into academia and also be able to see patients, that way I can have a direct impact, but also continue to do research that will have a long term impact.

What would your advice be to other aspiring inventors?

To always believe in yourself and your ideas, because if you don’t, who’s going to? You’re the greatest advocate for your ideas, so always keep pushing and never give up. You’re going to fail so many times, but you have to pick yourself up and keep trying, otherwise you might not have that breakthrough. It only takes one “yes” or one experiment to have a breakthrough that could change the world.