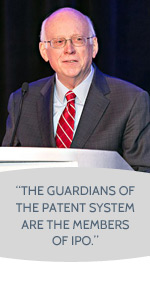 Lead the Battle to Educate Courts, the Public, and Congress: Become Officers of the Patent System

Herb Wamsley was first inspired to enter a patent-related field by President John F. Kennedy’s call for more American scientists and engineers to help compete with Russia’s then-flourishing space program. After attending engineering school, he wanted to become a lawyer, so he moved to a job as a patent examiner at the USPTO, where it was common to work by day while attending law school at night. He thought he was destined for a law firm, but when the USPTO offered him a job as a legislative and international attorney—the beginning of his involvement with IP policy—he accepted. After moving over to management at the agency and working as Chief of Staff to three USPTO Directors over a six-year period, and then as Director of Trademark Examining, one day in 1983, he found himself at the helm of IPO.

During the 32 years since then, Mr. Wamsley has played a key role helping to secure legislation and advise on international treaties that have transformed U.S. IP protection, including the Process Patents Amendment Act (1988), the TRIPS Agreement (1994), and the America Invents Act (2011). He has helped to lead “the battle that will never completely go away”—namely, convincing Congress not to divert funds from the USPTO to other unrelated government programs. Although IPO helped to ensure language in the AIA that will curb that tendency, “that’s an ongoing project,” says Mr. Wamsley.

Since he was hired, the Association has grown from two full-time and one part-time employees focused on lobbying on U.S. patent issues to 16 full-time, part-time and consulting employees focused on a range of international and U.S. IP issues, as well as expanding membership and member services. “The role of the IPO Executive Director over the years became more of a manager, and less of a lobbyist, but it still calls for speaking out on IP issues and working for adequate and effective IP rights,” says Mr. Wamsley.

For his guidance and service over the last 32 years, and his contributions and commitment to strengthening U.S. and international IP rights, Mr. Wamsley will be named this year’s Distinguished IP Professional at the 2015 IPO Education Foundation Awards Dinner in Washington, D.C. There, IPO members and other stakeholders will have their chance to say their goodbyes, although Mr. Wamsley says he isn’t quite done yet. “I’m retiring as Executive Director of IPO, but I plan to follow IP developments closely and to speak out when I have an opportunity for preserving and improving the climate in the U.S. and worldwide,” he says. “So I’m not retiring from the IP community.”

Here, Mr. Wamsley shares with Innovator Insights some of his career highlights, his perspective on the changes in public IP awareness over the last several decades and his predictions for the future of IP protection.

Over the course of your career, how has the conversation around IP in the public changed?

A better understanding by the Supreme Court of the constitutional principle of protecting the fruits of a person’s labor will help IP owners.

When I first came to the USPTO in the 1960s, and through the 1970s, the biggest issue was the perceived tension between patent and antitrust law. Eventually, the U.S. Department of Justice changed its position on antitrust enforcement and recognized the role of IP as an incentive for invention and innovation, so the patent-antitrust struggles faded away. The Court of Appeals for the Federal Circuit was created in 1982, which gave a big boost to patent law. Today, the public is much more aware of IP, which is a mixed blessing. On the one hand, there’s probably a better understanding by the public of why we protect creativity and innovation through IP laws. On the other hand, the higher visibility has resulted in more resistance in some quarters to having to pay for the fruits of innovation. So today, we’re seeing more public criticism of IP rights than was the case in the 1990s or the early 2000s.

Was there much public opposition to TRIPS when you were advising on it, like there is to the Trans-Pacific Partnership Agreement and other international treaties today?

We’ve seen the pendulum swing the other way on public support of IP to some extent.

There was not as much questioning of the value of having IP rights then as we’re seeing now. At the time of TRIPS, policymakers were talking about the new age of a knowledge-based economy. Among the developed countries a broad consensus existed that IP minimum standards for rights were needed as countries moved toward less dependence on agrarian and manufacturing economies. Now, we’ve seen the pendulum swing the other way on public support of IP to some extent.

Do you think overall it’s better or worse that the public is more involved in the conversation now?

Overall, I think it’s better, but a lot of work needs to be done. I believe the IPO Education Foundation has its work cut out for it. The broader awareness of IP is a good start. Now, we need to deepen the understanding of the benefits for economic development of having adequate and effective IP laws.

What would you most like to see change in the next ten years to help improve IP protection?

If I were limiting my answer to only one thing, I would say improvements in the patent and copyright laws in other countries. The U.S. has the best IP protection in my view, and the global economy is here to stay. For companies to protect their ideas and innovation worldwide we need an upgrading, and we also need harmonization in the patent area to reduce costs and facilitate worldwide protection.

Beyond that, in the U.S. we have some need to repair parts of the patent law—perhaps most conspicuous is the issue of patent eligible subject matter. The Supreme Court in the Alice case has brought a lot of uncertainty to the law as it applies to software, business methods, medical diagnostic methods and other technologies. Patent eligibility has to be clarified to preserve the incentives for innovation in those areas.

What do you think will present the biggest challenges for IP owners over the next ten years?

The U.S. will face a continuing challenge to maintain one patent law with one set of rules that covers all technologies. As more new technologies come along, there’s always a cry to adapt the system for the newest technology. Different laws for different technologies is the wrong way to go, because it leads to uncertainty. Congress can never stay far enough ahead of the curve to foresee what new technologies are coming that will need to be protected under the patent laws. So we need uniformity and simplicity across the board with respect to patent law, and that will always be a challenge.

Another challenge will be to achieve a more favorable climate in the U.S. Supreme Court toward IP law. The more extreme opponents are crying that patents and copyrights aren’t property rights. I believe there is a tendency for the Supreme Court justices to look at patent law as an arcane area, where the Federal Circuit has developed technical rules of law for protecting patented inventions that are different from mainstream law. This attitude leads to narrow interpretations of rights.

The idea that patents and copyrights are very significant property rights can be found in the underpinnings of the U.S. Constitution and the Declaration of Independence. Who better to remind of this than the Supreme Court? Influential thinkers including economic philosopher John Locke and the principal drafter of the constitution, James Madison, believed people were entitled to property rights in the fruits of their labor. Labor was described broadly and encompassed creation of inventions and writings. Later Abraham Lincoln agreed. A better understanding by the Supreme Court of the constitutional principle of protecting the fruits of a person’s labor will help IP owners.

What is the role of IPO members and of IPOEF in meeting the challenges?

Some attorneys’ clients may want weaker patent rights, but as officers of the IP system, everyone needs to make an effort to preserve an effective and balanced system.

I said at the IPO Annual Meeting this year that the guardians of the patent system are the members of IPO and other patent attorneys, inventors, and patent owners. I called them “Officers of the Patent System.” They’re the ones who have the passion and economic incentive to work steadily for improving the system. Today, we have a lot of litigation; some attorneys’ clients may want weaker patent rights, but as officers of the IP system, everyone needs to make an effort to continue the education of the policymakers to preserve an effective and balanced system.

What have you enjoyed most about working with IPO from a personal perspective?

I’ve enjoyed my long tenure with IPO because I believe IPO and the IPOEF have causes that matter, but in addition, I’ve just enjoyed working with the people. I’ve met so many highly competent people who are interested in promoting innovation, and I’ve had an opportunity as Executive Director to meet a broad cross-section of those people, both in the U.S. and other countries.

What are your plans for retirement?

I want to be one of those officers of the IP system who are needed to help guard and improve the system. I expect to attend the IPO Annual Meetings, which are always excellent, and the meetings of other associations. One of my interests is in promoting associations in the IP field. Associations serve an important public purpose in bringing people together, building a consensus, and contributing to more informed decision making by legislators, judges, and government executives. More people need to understand the role of IP associations and the benefits of joining and participating.

What advice do you have for your successor?

I know that the Association will thrive under Mark Lauroesch, who formerly was General Intellectual Property Counsel at Corning Incorporated and is an excellent selection for IPO. My advice to him is to follow the IPO Strategic Plan, which calls for more of an international reach for IPO and more public education. I believe that IPO will continue to grow under Mark, reaching more members from abroad and in the U.S., and will have an even greater influence on the IP field.