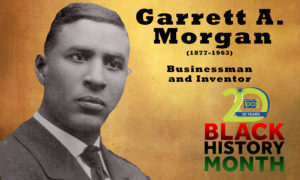 With only an elementary school education, Garrett A. Morgan moved from his childhood home in Kentucky to look for work in Ohio. Having worked as a sewing machine mechanic, he saved enough money to open his own sewing machine shop and later received a patent for his improvements to the sewing machine.

A naturally inventive spirit, in 1914 he patented a device that could enable safe breathing in spite of airborne pollutants that became the prototype for gas masks used in World War I. The device was popular among firefighters and rescue workers. The first African American to own a car in Cleveland, Ohio, Morgan is best known for inventing the modern traffic light. An improvement that incorporated a yellow light signaling that drivers should yield Morgan eventually sold the patent to General Electric for $40,000.