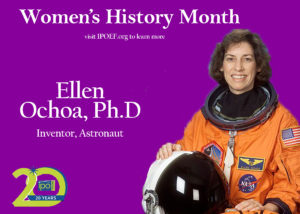 California native Ellen Ochoa earned her bachelor’s degree in physics and a master’s and doctorate degree in electrical engineering. Working as a researcher at NASA, Ochoa went on to be listed as co-inventor on three patents. She is the first Hispanic female astronaut, having taken four space shuttle missions: two each on shuttles Atlantis and Discovery.

In 2012 Ochoa was named Director of NASA’s Johnson Space Flight Center. She was the first Hispanic person and the second woman to hold this position. A California Hall of Fame and US Astronaut Hall of Fame inductee, Ochoa has six schools named after her.