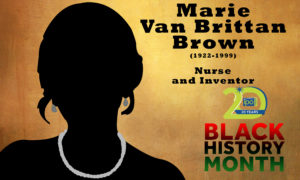 Marie Van Brittan Brown was born and raised in Queens, New York. Working as a nurse, her hours were not standard and living in a high-crime area made her want to feel safe, so she invented the first home security system. The system enabled her to know who was at her home and to notify police right away if needed. The invention featured peepholes, a camera, monitors, a 2-way microphone, and an alarm button. She filed the patent with her husband Albert in 1966 and was granted the patent in 1969. This revolutionary invention is the progenitor of security systems homes and businesses still use today. Brown is also credited with inventing the first closed circuit tv.