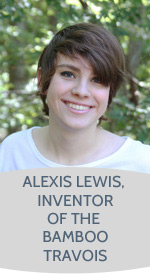 At age 12, when most kids already have enough to figure out with impending puberty, Alexis Lewis of Chapel Hill, North Carolina, decided to take on the challenge of finding a way to save children who were becoming victims of the 2010-2012 famine in Somalia. Brought on by severe drought throughout East Africa, the famine meant that families seeking refuge in distant camps and hospitals had to transport their often up to four children many miles. In desperation, parents were forced to leave children too young to make the trip by foot on the sides of roads to die. But, upon learning about the crisis through her mother one day, Ms. Lewis took a practical approach. “I realized this was quite a big problem, and it might be feasible to make some kind of device that would solve it,” she says.

That thought ultimately led to Ms. Lewis’ patent on the Bamboo Travois, a variation on the Native American Plains Indians’ horse-drawn travois, which was used to transport large loads over land. With the help and full support of her mother, Ms. Lewis set to work creating a lightweight, collapsible version of the travois, which won her a free patent application through the Smithsonian ePals Invent It Challenge. That success, and the fact that the USPTO deemed her invention patent-worthy, has sent Ms. Lewis soaring into the spotlight and has helped to highlight how innovative thinking can result in simple solutions to seemingly hopeless problems.

Although she’s not sure where her path will lead just yet—she is only 16 today, and is also interested in visual arts, writing and song writing—Ms. Lewis feels strongly that more kids should feel encouraged to invent. She has advocated for “Inventing 101” courses to be added to school curricula in order to dispel the myth that only “geniuses” can be inventors. “The whole concept of invention is really down to simple problem solving,” she explains. “Just look at one step, one possibility at a time.”

In this latest addition to Young Innovator Insights, Ms. Lewis shares her road to inventing and her thoughts on the importance of patents in that process. 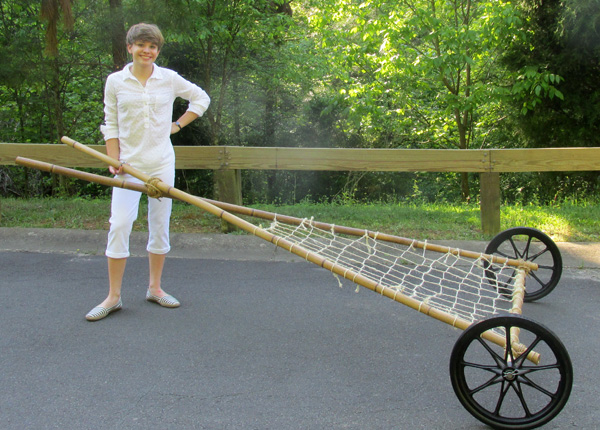 When I was about seven, I took a road trip across the country with my mom. While out there, I spent a lot of time with my grandfather, who was a rocket scientist on the Apollo Program, including Apollo 13—he actually ended up helping to save lives on the Apollo 13. So, while spending time with him, I learned a lot about how he saw the world and a lot about the building blocks of science and scientific thought. From then on I sort of kept the STEM fields—and with them, inventing—as a key tool in my toolbox.

Had you ever invented anything before the Bamboo Travois?

I reinvented the wheel a number of times at first. I would come up with interesting ideas, many of which had already been developed but were outside of my field of knowledge at the time. My serious inventions started when I began entering science fairs, and I did fairly well my first couple of times around. I learned soon after that there were very similar fairs that focused on invention, rather than strict scientific experimentation, so I decided to do some of those and I did quite well.

Where did the idea for the Bamboo Travois come from?

The travois started out in late 2011 when I was looking for ideas for an invention competition. Around this time, my mom sat my family down at the kitchen table and started reading from a CNN article about how parents in Somalia were forced to leave their children by the roadside to die during the Somali famine of 2010-2012, due to their inability to carry up to four children at once [the average number of children a Somali family has]. I realized this was quite a big problem, and it might be feasible to make some kind of device that would solve it. So, I set to work thinking of all kinds of slightly outlandish concepts, and eventually my mind wandered to the travois. It was originally an invention of the Native American Plains Indians, which I eventually repurposed into a much more modern, collapsible version, which can be used to transport refugees (pictured).

What was the process of making a prototype like?

Finding materials was in some ways straightforward, but in other ways very much not. The original design for the travois was two tepee poles crossed at a main vertex and dragged behind a horse or a dog—these tepee poles were made of wood, so conceivably lightweight poles were the sort of materials I’d be working with. I looked for all sorts of inexpensive materials that fit that bill, and I ended up with a palette of six different possible materials and then tested the elasticity of each. I settled on bamboo for Africa, due to the fact that it was quite strong and prolific in some parts of Africa.

“Patents draw attention because they are a government-issued seal of approval that the invention is, in fact, a bona fide new invention. They help lift the invention out of the realm of ‘it’s just an idea.'”

How did you go about getting it patented?

After I developed the travois, I entered it in a variety of competitions, including the 3M Discovery Young Scientist Challenge and the Smithsonian ePals Spark! Lab Invent It Challenge, which had an all-expenses-paid patent application as the prize for the age group in which I was competing. So I ended up winning, worked with the patent attorney, and the rest is history.

Had you understood what patents were before that?

I understood the concept of patents for a pretty long time—I can’t remember a point at which I didn’t understand it actually. I don’t recall exactly why that is, but I think I might have been rather inquisitive at five or six and asked someone. I saw patents as generally useful for promoting invention and innovation, from the publishing of artwork through the protection of IP rights. So, I had a good opinion of them, because they help keep the world going, if you will. While my invention might not need a patent, many inventions do.

How would your experience of inventing the travois have been different without a patent do you think?

Without the patent, it would have been much more difficult to draw attention to it—the travois is meant to be out there for anyone who can make it, but the patent does a great job of drawing attention and recognition from people. Patents draw attention because they are a government-issued seal of approval that the invention is, in fact, a bona fide new invention. They help lift the invention out of the realm of “it’s just an idea.”

What other inventions are you working on?

The Emergency Mask Pod (pictured), which is a device that delivers smoke masks to people trapped on the second floors of burning buildings, has a patent pending. I believe that fire departments would be interested in purchasing them eventually, but the manufacturer of the smoke mask currently doesn’t have the production capabilities to make it a reality. They think they’ll be able to start producing the mask and pod combo sometime in the relatively near future—on the inside of 10 years—but it’s not in production at the moment. 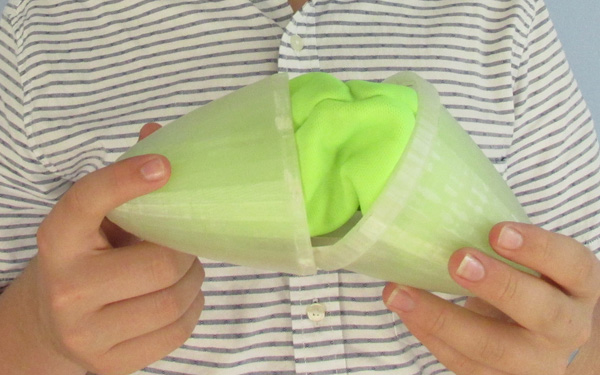 I’m working on some other inventions as well that haven’t been developed due to funding issues, such as a novel type of railgun power source which would allow a railgun to be carried by a single person. This would mean that you could have a military operative, for example, with the capability of firing a small projectile at mock 10 or 15 at will, which is something that wasn’t previously possible.

I’m also working on a modification to a Shaped Charge Liner, which would be quite useful to oil extraction and military technology, for example. And finally, I’m working on a hybridization of several different kinds of ion engines, which, according to experts in the field, quite possibly may improve the efficiency of ion engines relatively substantially. That’s another one that I really, really hope to test out, but it’s quite difficult to get a vacuum chamber and xenon gas and a whole bunch of other stuff that costs somewhere in the range of tens to hundreds of thousands of dollars.

Would you ever consider commercializing the travois for sale to non-governmental organizations, for instance?

It’s not being commercialized and sold to anyone at the moment; it takes a lot of work to get a production line up and running. I’m working on it though.

What’s your advice to other young people who might want to invent but feel it’s not feasible for them?

I’d say that the whole concept of invention is really down to simple problem solving – just look at one step, one possibility at a time, and just try to find different points of view that people haven’t used before and look at the problem in a novel way. Those new ways of looking at an old problem or ways of looking at a new problem are where breakthroughs are going to be made.